Jeanne posted her cat story on The Master’s Artist and reminded me of the cats at Grandma Schalk’s house. Sit right on down, want some coffee? 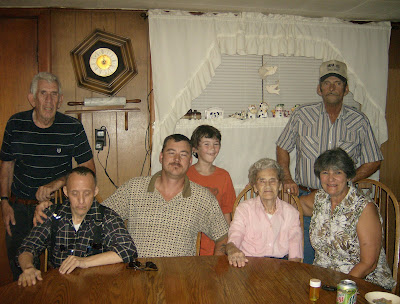 Meet the family. First there’s Lloyd. He was, at birth, chosen to be the son to stay. Is there a technical term for this? Lloyd was never allowed to date let alone think of moving out or getting married. He needed to remain at home to take care of things. He worked at Brown’s Shoe factory for years, til they shut down then he took a job over at the school as janitor and did that until he retired a few years back. He can’t cook a decent dinner to save his life, but the man can bake the hell out of a lemon meringue pie and makes the best canned vegetables I’ve ever had. 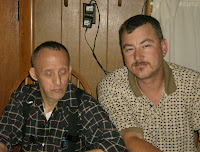 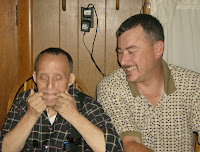 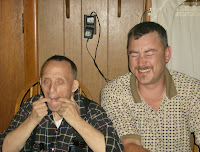 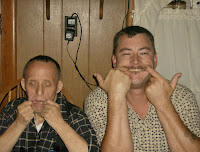 Next there’s Denny. Born with Down’s Syndrome and expected to die around age eleven, he’s now in his sixties and ornery as ever.

Denny loves people and loves visitors. He’s also a collector. Of everything. McDonald’s Happy Meal boxes, fries still at the bottom, Hotwheels cars, my hair clips, checkbooks, pens, handkerchiefs, combs, and whatever else strikes his fancy. Coming to visit means Denny’ll be bringing out the best of the best to show off. You can’t look for too long, he thinks your stealing back what rightfully belongs to you. He doesn’t talk, just grunts, but believe you me, it is clear what Denny is saying.

Typically, Denny’ll bring out something, show it to me and Grandma, who is blind mind you, will say, “What’s that there. My check register? Denny! Give that back.” She’ll walk over and try to get it back, but Denny’s adamant, it is his. After awhile, Grandma tires of trying to pry the check register out of Denny’s hands and calls to Lloyd, who hops up and yanks it out of Denny’s hand. Denny then pouts and sulks until he gets pie. 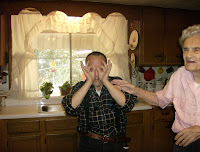 He makes faces at us all the time, probably because we play along and make them back. He loves hugs from everyone who visits and steals your cool stuff, takes it to his room, puts it on top of a piece of paper and sits to look at it. We usually bring Denny a stuffed animal or other kid’s toy to avoid being robbed blind.

Speaking of blind, Grandma Schalk is next. You recognize Phil and Zane, right? They’re right there between Denny and Grandma. I have two stories that will tell you all you need to know about Grandma Schalk. First, she’s pretty well blind. When she wants to see you, she calls you over, puts her hands on your face and yanks you to her nose–that’s when she can see you. Nose to nose. “Oh. Phillip! It’s you. Well, I didn’t knowed you were coming to visit. Lloyd, why didn’t you tell me Phillip was a’comin’?”

Lloyd, who talks louder than anyone I’ve ever met: “Well Mooooom. I did tell you. He called and I told you, ‘Mom, Phillip’s a’comin’ and I went and got extry salad for Michelle.”

Grandma gets Books on Tape from the state and send back the pornographic ones and calls and yells at them for sending such nasty books to her. You know, the ones where there’s a kiss. Lloyd got in trouble years ago for have pornography in his room. 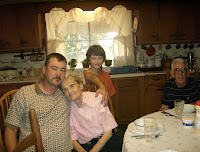 I first met Grandma Schalk fourteen years ago, Phil took me to meet the family. Except he was divorced.

And I was the new one.

For five years Grandma Schalk wouldn’t call me by my name nor talk directly to me. I’d always end up next to her at the dinner table and she’d look around me and say to Phil, “Phillip, tell that girl they’s some different salad dressing in the icebox if she don’t like what we got out.”

Me: Thank you, Poppyseed dressing is great.
Grandma: Phillip, tell that girl she’s welcome.
Phil: Grandma, she’s right next to you, why are you telling me?
Silence.

Five years this went on. Now, she wasn’t spiteful, she was sweet as pie and genuine. She liked me fine, just wouldn’t talk to me. She told Phil in front of me what a wonderful girl I was. I never could be angry.

Remember I said Lloyd didn’t cook well? Dinner was spaghetti one night. A pot of spaghetti pasta, swollen, overcooked and starchy. A pan of browned hamburger. A jar of canned tomatoes. Spaghetti.

Baked Chicken. A whole fryer cut up, placed in a roasting pan and baked. In four inches of vegetable oil.

I ate a lot of salad. Poppyseed dressing is just fine, thank you. Oh and please, more pie.

I couldn’t take it. I went down to the Piggly Wiggly and bought stuff for real spaghetti. And garlic bread, the kind with the mozzarella cheese on top. Mmmm. I cooked the simple meal, sat next to Grandma, passed the bread.

Midway through the meal, she turns to me and says–turns to me, “This is the best derned spaghetti I believe I’ve ever had, Michelle.”

She goes on. “This bread, why, it’s delicious. Lloyd, give me that grape jelly over there, I reckon it’ll taste even better with some of that on it.”

But, hey, she addressed me and said my name! And since then, she’s talked to me non-stop.

I promise I’ll get to the cats. You just gotta meet these folks before I can go on.