I think this week’s word (ironic as it may seem) will go a long way to explain my complete lack of posting last week.

Though, I don’t believe in irony.
So really, what happened and when it happened and how it coincided with my life is nothing short of amazing.
Last week, I was lost. I should have posted the self-portrait, but I was so lost, I couldn’t find my way to myself. I was trying to be someone I’m not but I didn’t know how to be the me I needed to be.
Once upon a time, I submitted a story to this promising new publication. My critique partners and I longed to have a story picked up by this journal. One got published in the first issue. Not me, though, I was rejected for a writing style that was “too genre” for a literary journal.

Of this new publication was born a genre anthology. Hoping for acceptance, I submitted. And was promptly rejected for writing “too literary” for a genre publication.

This is apparently the tight-rope I’m destined to walk.
A strange thing happened next, I was asked on to the yearly genre anthology as an editor (where two of the stories I worked on won Editor’s Choice awards!) The next issue saw my promotion to Editor-in-Chief of The Midnight Diner.
Months later, a position on the board of directors for the two publications opened up–yours truly was brought on as secretary.
A few months ago, I was asked to accept the nomination for president of the board. And I did. 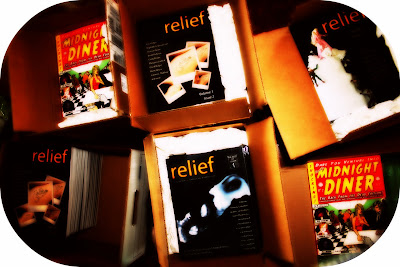 This is my official announcement, and I’ll not likely talk much about it after this as it causes me great discomfort to think of myself in this way. The truth of the matter is, officially, I am now the president of a 501c3 publishing company. The former president and I have been spending countless hours working on a smooth transition.

Last week was crunch time. Last week I learned more and worked harder than I have in eons. And just a few days ago, the first shipment of books in my charge arrived at my house. Things got hairy there for awhile and I was stressed out and tense and I was sure they picked the wrong person for the job. Because I can’t fill the shoes of the president of a publishing company. I was lost. I wanted to give up on Popinjay and my blog and my writing and homeschooling and everything else because I’m no good at any of it. Except people keep telling me I am. I was working 12 hours a day on this transition and trying to do it all and I was failing miserably as a wife, mother, friend, and all those other hats I wear.
Somewhere along the way last week, I realized (much to my dismay!) that I’ll never be good at any of the things I do. Or rather, I’ll never be good enough. Because I’m a perfectionist. Because nothing is ever good enough in my life. It can always be improved–no matter what the it is.
Then I saw the connection.
I guess I wasn’t really lost.
When is it ever ok to let things remain status quo as a wife? What happens if I stop working on my marriage? What would my relationship look like if I stopped trying?
Same with being a mother. And a friend. And a writer. And an editor. And a homeschooling mom. And everything else.
It’s obviously who God built me to be. And this week I feel pretty accomplished.
* * *

Next week’s word is: BITTER

So–Let’s see your photos for ACCOMPLISHED.
Link up and don’t forget to visit the other participants!