Two nights ago I had another Quetzalcoatl dream. December 8th.

It was my job to crack open the delicate ceramic greenware. They were large Christian crosses, but not so large I couldn’t hold them. Maybe 2 ½ x 2 feet. They looked like a combination of these two crosses: 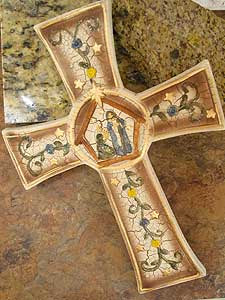 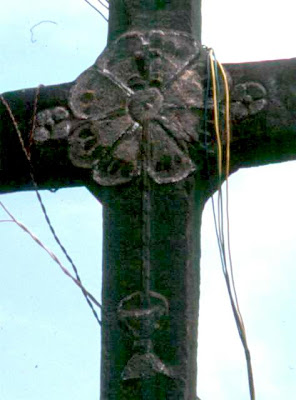 They had the shape of the first, but the design of the second and they were greenware, so they looked more like the second.

My job was to hold the crosses flat and smack the back sides smartly against the flat surface I was standing before. When I did it right (and I didn’t mess any up in the dream) the whole back came off to reveal what was true and real.

I don’t exactly know what that means. Every time I cracked one open, a little gust of wind came out and flew away from my body and I was awestruck. No matter how many I opened, the feeling of awe was staggering. I thought, while doing my job, that if everyone understood the truth, if everyone knew what was hidden in the ceramic greenware crosses, they still wouldn’t take the job, but I was humbled that it was my job.

Quetzalcoatl responded to my thoughts as I opened the next cross and the wind, instead of going away from me, swirled around my body like a coil from my feet up to my head and then he hovered at my eyes. He told me I was chosen for the job, then he was gone.

Here is my first Quetzalcoatl dream.

Quetzalcoatl is the Aztec god of intelligence, self-reflection, and creation.