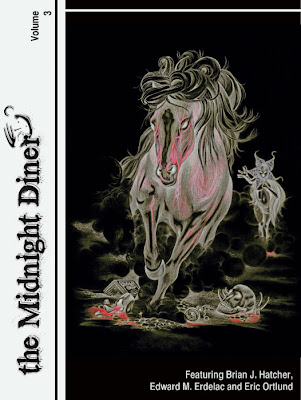 So much work has gone into this! I’m proud to present the final cover for The Midnight Diner 3 edited by yours truly.
What do you think?

Most of you out there in blogland also follow me on Twitter or Facebook so you probably already know why this blog has sat dorment for a month. The rest of you, maybe sponsors I’ve just started building relationships with or new readers should understand this isn’t typical at all.

Here’s the recap of the last month:

April 14th: I headed to Calvin Festival of Faith and Writing to represent Relief Journal and The Midnight Diner as the new president of the company that publishes them, ccPublishing.

On the way there, my sister called me concerned with my mom’s health.

April 16th: My dad’s birthday, mom was hospitalized. I was still at the conference.

April 24th: My parent’s 39th wedding anniversary, mom has brain surgery. Doctors diagnose her with Diffuse Large B-cell Lymphoma. (We canceled our trip to our grandson’s first birthday party in Missouri to be at the hospital for mom’s surgery.)

April 26: Phil’s step-dad, the only dad he’s known because his dad died in an auto accident when Phil was a year old, is diagnosed with lung cancer, has a large tumor in his lung and the cancer has wrapped around his spine and nearly severed a vertebrae.

April 29th: We leave for Missouri.

April 30th: Phil’s step-dad has surgery to remove the lung tumor and part of the spinal cancer.

May 3rd: Phil’s step-dad has surgery again, this time to put in an artificial vertebrae.

May 6th: Phil’s daughter puts on a second-first birthday party for our grandson! 🙂

May 7th: Mom has an IV bubble put in her brain for chemo.

May 8th: Back to Indiana.

May 9th: Mother’s Day, I spent the day with mom at the hospital.

And here we are. I’ve been at a hospital nearly every single day since April 20th. Thank goodness for friends who are willing to help out with Popinjay (and will continue to help!) until things are a little less frantic around here. I’ve made some commitments to a couple sponsors and I’ll be catching up on those posts soon as well as trying to participate in Popinjay. I might even get to post a blog or two with thought on this past month. You all know how much I loathe cancer for taking my best friend, Jill.

Amber said something when this all started, I can’t remember when it was, but she said something about all this stuff hitting right after some very good things happened in my life regarding God. I can’t help but think she’s right. That’s the idea I need to explore. Am I cursed or blessed? I’ve posted about that before with a lighter tone, but after several writer’s conferenced and critique partners who’ve mentioned the fact that I might well be cursed–I might just believe it. LOL

Did you hear the good news?

I am now Editor-in-Chief of The Midnight Diner!!

If you’re interested in submitting, read Relief Fiction Editor, Chris Fisher’s, series: What Happens in This Story, I Know What Happens, but Who Really Cares, and Is This the Best I Can Do? If you’re going to be lazy and read just one, then let it be the last one.

After you read Chris’ superb advice–Follow the guidelines:

Third Edition of The Midnight Diner Submissions are Open!

The Midnight Diner is a hardboiled genre anthology with a Christian slant. No ABA restrictions on God, no CBA restrictions on reality. Didactic preachy works are dismissed unceremoniously; we’re looking for high quality works that are uncompromising in craft, content, and quality.

Submissions for the third edition of The Midnight Diner are now open at the Relief Writer’s Network. Here’s what we’re looking for; please read carefully. Submissions that are completely out of gamut will be subject to ridicule and immediate rejection.

1. Unpublished Short Fiction up to 10,000 words. Simultaneous submissions okay, but you need to pull your submission ASAP if it gets accepted elsewhere.

2. Submissions are only accepted via the Online Submission System at the Relief Writers Network. www.reliefjournal.com Absolutely NO email or snail mail read or even remotely considered unless your name is Stephen King and you wrote The Stand. Anne Rice, Neil Gaiman, and F. Paul Wilson are also exceptions. Everybody else, get with the program. There’s a big button at the top of this website that says Submit Your Writing. If you email me asking where the link is, expect severe sarcasm.

3. Categories for Submisisons are:
Category Examples (for clarification only)

Jesus Vs. Cthulhu – No posers. If you’re submitting in this category, you had better be familiar with Lovecraft or Derleth’s work, and the piece should reflect it.

Note: Combinations of Genres are encouraged. For example, a hardboiled detective investigating a paranormal crime, or a monster story that has a Twilight Zone twist. You may and probably should select multiple categories when submitting your work.

4. Compensation: Three Editor’s Choice awards will be selected. Prize money for Editor’s Choice is a hundred bucks. All categories are eligible. Everybody else gets their names up on Amazon, a contributor’s copy, bragging rights, and the possibility of being on the Diner staff for the next edition. Approximately 21 stories will be selected for publication.

5. No hardcore sci-fi. I don’t want to read stories that I have to learn a new vocabulary or solar system for. I don’t want to read about what happened after the fourth war for Alpha Centuari, Beta Centauri, or any other Centauri. Besides, you can’t fit a starship into a Diner. Other places are more suited for these genres, i.e. the incredible site at raygunrevivial.com for Sci-fi helmed by Diner-approved editor Johne Cook.

6. No sword-and-sorcery fantasy. Do you know what happens when you let ogres and trolls in Diners? You will be billed for any messes they make.

7. Know what we’ve published in the last edition. The Diner is available on Amazon.com, Barnesandnoble.com, and of course on the Relief store.

8. Spiritual warfare is allowed, but should have an original twist. Absolutely no shining swords – you can poke somebody’s eye with one of those in a diner, and we don’t have the insurance for that sort of thing.

9. The Diner is not for children, or the faint of heart. Jesus dressed up as Thor, a whore who moonlights as an exorcist, a bouncer at a strip club, and more offbeat characters were regulars in the first edition of the Diner. This is not Guideposts or your Sunday School quarterly. Pansy sanitized work will be unceremoniously dismissed. Do not send me work where gangbangers say things like, “Golly gee, Beav, what ever are we going to do with this swell crack?”

10. Submissions will tentatively close December 1, 2009. Do not send queries. Submit your work.

11. Release Date for the third edition of Coach’s Midnight Diner is April 2010. The Third Edition will be available in print, soft cover and perfect bound in a 7″ishx10″ish trim size at Amazon.com, BarnesAndNoble.com, and several other venues. It will also be available in Amazon Kindle and Sony Reader format.

Sit down, order some coffee, and let’s see what you’ve got. Give me your best shot.

This first go at Coach’s Midnight Diner has been enlightening, to say the least. Submissions are closed for this round and now comes the hard part. Deciding.

Reading while submissions were open was not as difficult as deciding which stories I like enough to publish. The Diner is a team effort, but when my name is on something, I hold myself personally accountable for the content. Which means I’ve taken seriously the effort I’ve put forth. It’d be nice if authors gave me the same respect.

I’m developing pet peeves, too. Since I’m opinionated, that’s probably scary. Not like I didn’t have anything to complain about before today. But the list is growing.

This editing thing is a massive beast of self-esteem pointing right back to my own work. But there’s fun to be had in the learning of these lessons.