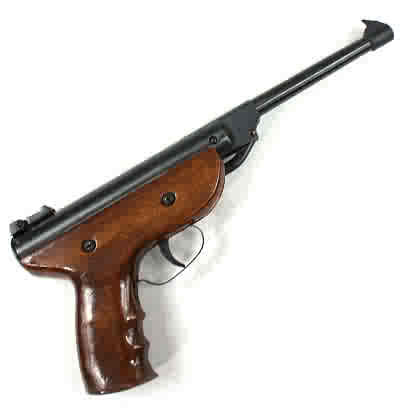 Because when the power goes out and you’re stinky, there is no other option. 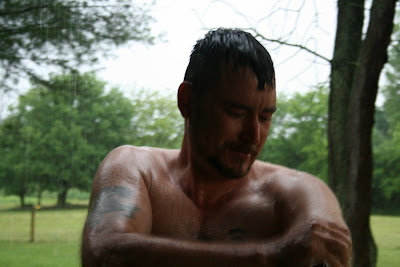 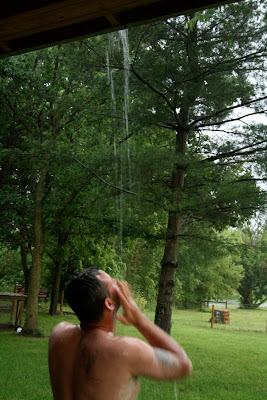 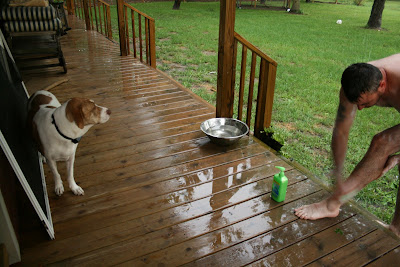 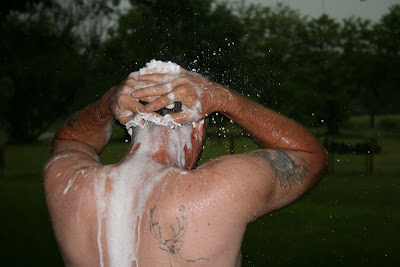 I seriously couldn’t wait to post this story. Phil and I must have laughed for a half hour about it when it happened around 2am and then again just as hard when we woke up. And this is one of those stories that will be around a lifetime!

Remember that our bed is in the living room because we’re remodeling? There’s a door we let the dogs out of in there, so when Patches got up at 2am and scratched to go out, I was not a happy camper. Okay, happy that she’s a puppy and not piddling on my floor, but it was -23 degrees overnight and our poor furnace is not keeping up. I also don’t sleep with much between me and the covers. Can you say COLD?

Plus, I think I’m getting sick. Phil didn’t know I was letting the dog out so he asked, “Honey? Are you okay? You’ve been making a lot of noise and you’re not sleeping good.” I was all stuffy and my head hurt and I was having bad dreams.

But I stopped whining long enough to let the dog out.

Then I let her back in.

Before I could get back to bed, she was already on my side, snow-covered paws walking circles in my little comfy spot. I was not about to lay down on a snowy bed.

So I found a nice fleece blanket (soft!) and rather than turn the obnoxious bright lights on, I opened my cell phone as a nightlight.

Zane is 8. And is obsessed with his peach fuzz.

Zane: I have one chest hair. Look

Zane: I can see 4 dark spots when I look in the mirror on my lip right here (points to upper lip)

Me: Wow! So you’re getting a mustache, huh?

Me: That’s something all right.

Zane: I have maybe a spot on my armpit too.

Zane: I have one more kind of hair.

Me: Stop. If it’s anywhere near your privates I don’t want to know.

Zane: Well, it is, but I wasn’t going to tell you that.

Me: Stop talking. I don’t need to know about that hair.

Zane: But I wasn’t going to…

Me: Stop. Talk to your dad about that.

Zane: Well I have 4 kinds of hair now. (Walks away proud and laughing)

Last night Zane said, “Why is there still a Christmas Tree in our living room?”

“Because I haven’t taken it down yet.”

“You really think that?”

“Yes. The only work you do is on the computer with your fingers.”

“Daddy does physical work all day long. You just use your fingers. That’s lazy.”

“I see. So you don’t think my brain is engaged when I’m writing my stories?”

“Okay. You use your brain and your fingers. How hard is that?”

Guess who’s scrapping the current homeschool schedule? And guess who will be writing short stories for, oh, maybe a month?

And Zane will quite possibly have to stick by my side for a week and do all the things he doesn’t see me doing. Laundry. Dishes. Toilets. Sinks. Cooking.

Oh the joys of homeschooling!

To be fair, he’s got a point about the Christmas tree. I don’t think it’s laziness as much as avoidance. I just don’t want to do it so I keep doing other stuff. I don’t want to do it because it is so very tall and I am so very short. It is overwhelming and I have been letting that eat away at me.