I’ve been hearing that a lot lately in regards to both my professional life and my private, personal life.

Yet I sit here and my eyes overfill and pain spills down my face. I listen to this and I tell myself I am not what they say I am.

I can ignore it for a long time. I can give second chances. I can forgive, I have forgiven, I will forgive again. again. again.

But what I will not do is submit myself to the abuse that others dish out with no regard.

I don’t know how it happened. How it all came to blows on the same day, the same moment.

I was making a professional resignation from an organization I’ve been a member of for nearly a decade.  Y’know what. Wait. Let’s be clear here. The people  in that organization have become family to me. We’ve fought, argued, debated, grown, and always–always we’ve loved.  It is not those people I walked away from, those people joined arms in support and walked away as well. It’s really two of the officers of the now disbanded Indiana Horror Writers that I took a stand against. A couple of the officers made some poor choices with sexist language and after trying to deal with it as a group, without resolution, six of us gave our resignations and ended our affiliation with the Indiana Horror Writers. One of us has control over the digital assets of the organization and we’ll see what happens next.  The two men we had problems with are forming another group, people are taking sides. More than that though, I’m accused of being unprofessional, a liar, unreasonable. My posts were deleted, I was removed from the organization’s forums, blocked from one of the officer’s Facebook friends list, was told I couldn’t resign because I wasn’t an officer, talked about in a private forum I was removed from, but all the while told that the doors are open and it’s a safe and comfortable place to discuss the issues. I was told it’s my fault. The message is clear: Shut up.

Safe does not equal degrading me, attempting to shut me up, or trying to control me.

At the very moment I hit submit, and I’m really not kidding, the very moment, I received a phone call from my dad, who proceeded to tear me to shreds verbally. I was called names, accused of stealing money, threatened, and made to feel guilty because it’s my fault. I was hung up on more times than I care to count. And then, one time, the phone didn’t disconnect and I heard what dad was saying to my sister about me. I heard the names they were calling me. The message is clear: Shut up.

If I listen to these people I’m a liar, a thief, a bitchy broad, a hard head, I’m unprofessional, disrespectful, lazy, jobless, and nothing is enough. I’m not enough, I didn’t do enough, I don’t do enough, I’ll never be enough. Never.

{like when I was a child, I was a slut, a bitch, a whore, a liar, a thief, worthless, told that I should have never been born, told that I was brought into the world and can be taken out of it. I used to pretend I was adopted because that made more sense to me.}

to drown them out.

because they think they’re the victims.
they cry about injustice and how they’re being wronged by me.

Months ago, they were all told how to fix the issues that came to a head on Monday. Resolutions were spoken. Ignored. Because they won’t own up to their parts, I am the punching bag.

After the dual meltdowns Monday morning, so much adrenaline ran through me I thought I’d puke. I was shaking so much for so long and I couldn’t make it stop. I cried more that day than I cried when my uncle hung himself and when my mom died.

I stood up and said, Fuck this. This is why my body is in adrenal failure. Because people who say they love me haven’t the first fucking clue of what it means. I will not submit myself to this for one more second. And if you hate me, it will eat you alive, not me.

I do not care if another soul on this earth believes me or thinks I’m a horrible. Turn the whole world against me if you must. I am ok with that. I thought I couldn’t live with these decisions, but I found out I can.

This is not brave. This is survival. This is the last straw in a long line of straws that I have allowed to decimate my physical, mental, and emotional health. If you think this is about just one little incident, think again. It’s about a lifetime of people treating me like shit and I’m not doing it any longer. So if that means leaving organizations I love and walking away from people I love, so be it. Go tell someone else what I horrible bitch I am. I’m not going to shower myself in insults and bathe in lies. I’m not going to eat your hurtful words nor drink your warped version of love.

You can see all of my Shadow Shot Sunday entries here.

This was taken at the haunted Woodcarver’s Building in Converse, IN. The Indiana Horror Writers held our first annual Winter Retreat in the building. What a great place for horror writers to convene. 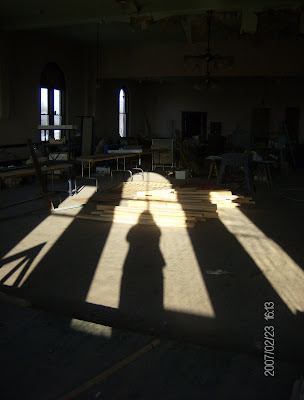