I first wanted to take a photo (somehow) of my feelings of bitterness towards the church (in general) for being so legalistic. But the more I thought about it, the deeper I dug a hole. If I take a picture of a church building, that’s just a building. It has nothing to do with the people who congregate there. I could stand outside of a church on Sunday morning and snap some shots of the people leaving. But they’re not necessarily the people I have issue with. I could dig up some old photos of the people I do have issues with–but that doesn’t seem quite right.
Then I thought I’d go to the store and take some pictures of vinegar and baking chocolate.
Then I thought, I’ll just skip it, because I know what the truth is and I’d rather hide it.
In the same vein as my Bad Attitude post, here it is. 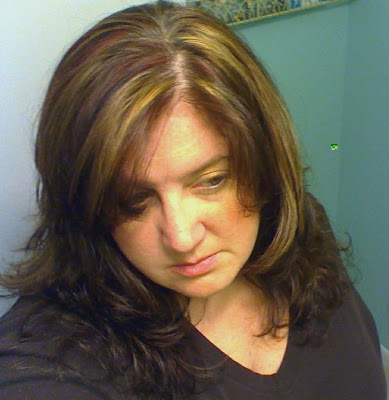 Me.
I am bitter.
I am the one who holds on to the hurt, who constantly rehashes it. I can’t get it over it.
You can search my blog over and find posts about what the church has and it’s people have done to me. It started when I was a small child and my Catholic church wronged me over and over. Then I was atheist. Then Independent Baptist. Then nothing–and in that nothing is when God did His best and most amazing work. Then Southern Baptist.
Now? Yeah, now I’m bitter.
I should be nothing again.
Because if I am nothing, then doesn’t that give God something to work with?
* * *

Next week’s word is: FUNNY

So–Let’s see your photos for BITTER.
Link up and don’t forget to visit the other participants!

The purpose of Sincerely ‘Fro Me to You (every Thursday) is to link up a post about something from your past. You can reach back all the way to your childhood and bravely post pictures of your ‘fro (don’t act like you didn’t have a bad hair style. I know you did) or post something from last year and tell us about it.

As Marcy says: “Public humiliation is the new extreme sport!”

Goodness. I don’t want to know how many people were trying to stifle their chuckles this day.

I obviously didn’t get enough use out of my First Holy Communion dress considering I thought it a brilliant idea to wear it to school. Probably for awards day.

I must point out the casual dress of the other students in line with me. T-shirts and jeans. 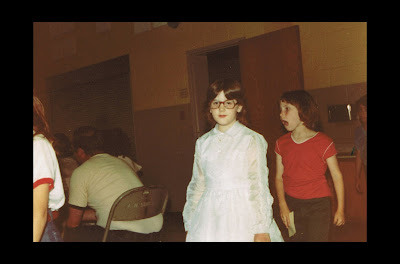 Yes. That’s me. Always the eccentric.

Topless on a Motorcycle

And you wonder why I am who I’ve turned out to be? Seriously.I’m about 2 in this photo. Topless. On a motorcycle. This isn’t a one time occurrence. You’d think my parents didn’t buy me clothes as a toddler. Guess I needed to be different. Some things never change.Oh those were the days. I could run around topless and cute and people actually took photos instead of ran away! Though if I ran around topless today and Phil had a camera…nevermind. TMI

I suppose this is somewhere around the summer of 1974. 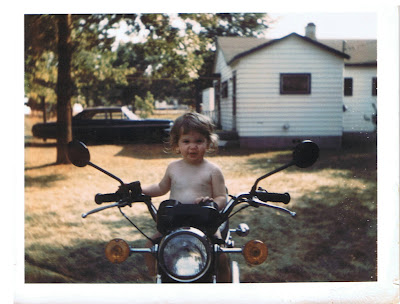 That’s our neighbor’s house, I can’t remember his name, but I remember he had two front doors (check it out! That was SO cool to me as a kid!) And he was on oxygen and he always, always, always gave me a butterscotch when I went over to visit. He was the good neighbor. The old lady on the other side used to keep my toys if they went over the fence. So I picked her flowers through the fence and gave them to my mom.