My grandmother for watching it happen and not stopping it. My mother for knowing and not protecting. My father for the angry beatings. My great-grandfather who did it. The teachers who should’ve known.

I truly thought I was healed.

Turns out forgiveness isn’t a one time act. Neither is healing.

I guess there are stages. And at this point, I don’t know if I’ll ever be completely healed. (I’m guessing probably not.) How can a shattered soul be put back together with no scars?

There is a certain sect of Christians that would have you believe that Jesus heals without leaving scars. I don’t buy it. Jesus showed his scars to the disciples and when they saw them, it was then they believed it was him. They didn’t even recognize him until that point. So while I fully believe I can be healed, I don’t think it’s possible to do so without scars.

I’ve also been having a hard time with the fact that what took place was witnessed and watched by God. 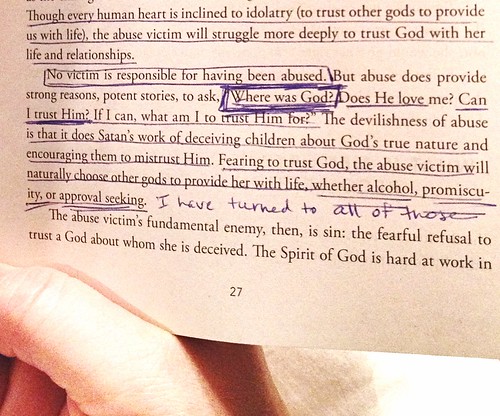 The Wounded Heart–Hope for Adult Victims of Childhood Sexual Abuse

I forgave everyone but God. I believe he loves me, but I don’t trust him because he watched it all happen. And yes, I feel like this is a harder thing to deal with than other people’s things. Sexual abuse destroys so much. It’s not like I chose it. Someone else made that choice for me. So all the talk about the fall of man and sin and free will doesn’t do much for healing after this. I accept that my family was horrendously dysfunctional, I accept that hurt people hurt people. I accept that those who abused me or watched it without stopping were probably stuck neck deep in the abuse cycle. They were all probably abused as well. So while I’ve forgiven them, I still wonder what made them cower to the abuser and let the cycle continue? What made me different in that almost every choice I’ve made in parenting has been in some part to protect my son from that same cycle?

I didn’t think wondering meant I wasn’t healed though.

I’ve spent all of two decades working on becoming healthy. Mentally, emotionally, physically, and spiritually. I made a break from toxic people–family and friends. I moved away (literally and metaphorically) from their toxicity and have found myself, for the first time ever in my 42 years not in the company of severe and destroying dysfunction. I really, truly thought I had made it. That I had achieved what I’d been working towards. I did it with God, I gave him the credit. I thought I could now look forward instead of the past constantly pulling at my back, tugging me, slowing me down, weighing and exhausting me. I MADE IT!!

Then God was all like, Uh. No. Now we have this little trust issue. You don’t trust me, remember?

Defeated. Discouraged. Just fucking over all of this pain and misery. Now I have to do more work (because I choose to. I know it’s the right thing to do, but dammit if it isn’t just pure torture.)

So I start with reading, because it’s the best way I know to learn.

True to form, I’m reading six books at a time. Which is kind of ironic. Every big spiritual breakthrough I’ve had has come during the months leading up to Lent and Easter and I’ve documented the books I’ve read in the process. Though now that I’ve burned my journals as a part of this process of healing, you’ll have to take my word on it.

I haven’t processed the culmination of concepts, but this I know…I have not and do not trust God. I feel like I’ve been let down by him before and rather than face that kind of pain, it’s better for me to just

focus on other things

In other areas of my life, I’ve learned to trust God. When Phil was fired in 2011 we were left jobless and homeless. My anger burned for the people who fired him, but when I prayed, I heard God ask me, “Who is in control of your life? Them? Or Me? Your anger should be directed at Me. They do not control you.”

Just like *that* my fiery anger was extinguished and I moved on with great expectations of a more abundant life.

But ask me to trust God to heal me from my childhood sexual abuse? Nope.

I’d rather be alone in this, thankyouverymuch.

But it’s really not ok to be alone in all this. I cant’ bring myself to see a therapist because honestly, I don’t want to face all that shit again. I try not to look back there. Leave the past behind you and all that feel-good-but-not-true crap.

The ripping apart of a soul doesn’t ever go away, it’s never forgotten. It’s as much a reality as my birthday, only worse. Even if I never knew the date of my birth, it would still be there and no matter what technique I employed, it wouldn’t ever go away or be forgotten. You don’t think about your birthday every day of the year, but there are times you do and especially close to the date. It’s like that with trauma. And so it is in my life.  The abuse can’t be erased or forgotten, and while I’ve forgiven, I’m not healed.

What I can do is work towards healing. Make things better than they were before. I can accept God’s offer of redemption. I don’t know what that looks like and I don’t know how I’ll trust him fully–if that’s even possible? But I know that he’s been pretty good to me for the last twenty years. It’s not always been easy or gentle, but it has been right for my soul.

I wish no one ever had to go through this. But since it’s impossible to eradicate, I guess all we can do is try to overcome.