So how do I feel the morning after burning my journals? 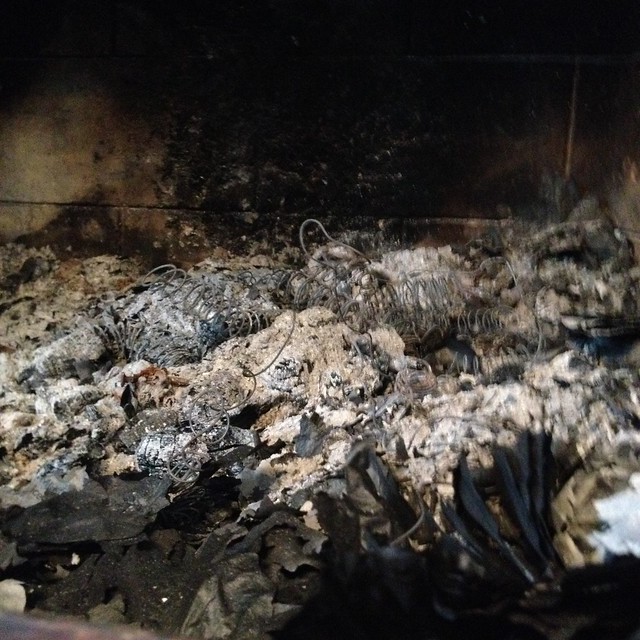 When I wrote  in my journal, it was a process that allowed me to release the memories so that they no longer belonged to me. It was not a part of me. Once out of my head and on paper, I was free to carry on without carrying the mental weight.

I added physical weight though (and this picture only shows about half.) For 32 years I’ve been hauling these around. I talked to my journal as if it was a person. The times I said some variation of “you’re the only one who understands, Journ,” or “you’re the only friend I have” were astronomical. 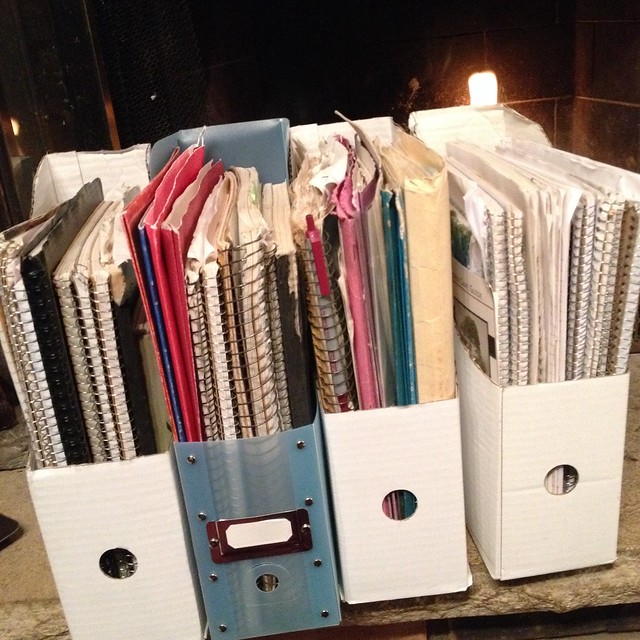 It’s odd. The 42 year old me looks back at the child that poured her tortured soul into these notebooks (and yes, there is still a disconnect) and wonders where were the adults?  Why didn’t they stop the abuse? After the abuse came the promiscuity. The names, the dates, the details of a child’s sexual escapades. Later, just dates and details. Names didn’t even matter. I wanted desperately to be loved. 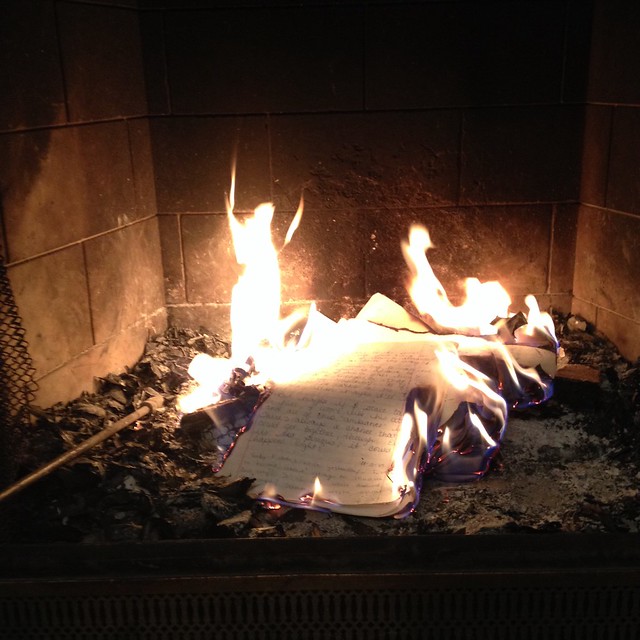 But that little girl didn’t know what love was. I say that not in a wispy, naive, youthful way, but in an ugly, violated way. I did not understand that there was anything beyond sex. I was used inappropriately and everyone loved the man who continually did these things to me. Often, they saw it happening and turned away or went into another room. What could I have known of love, aside from pain and confusion? If they loved and adored him in spite of what he did, then that must be the way I would achieve love.

The first boy I dated was a few years older than me and wanted to have sex. I politely refused. Thank God he was a gentleman (and he still is.) I broke up with him soon after because I felt so awkward with thoughts of sex swirling around me and I didn’t know how to be a person in a relationship because all of my other familial relationships were so very broken. After him, I dated someone my age, he ended up being my first. It was ok in the beginning and we dated quite a few years. We were like fire and gasoline, though, and it ended in quite the explosion.

That’s when the proverbial flood gates opened–or should I say that’s when my legs opened for pretty much any boy who came near? I realize that sounds like I’m degrading myself. It’s less of that and more “just the facts, Jack.”  So. For about six years it wall all sex and alcohol. I had a couple of friends during that time who tried to tell me I was harming my reputation, but I already knew I was worthless, what did it matter if other people knew, too? 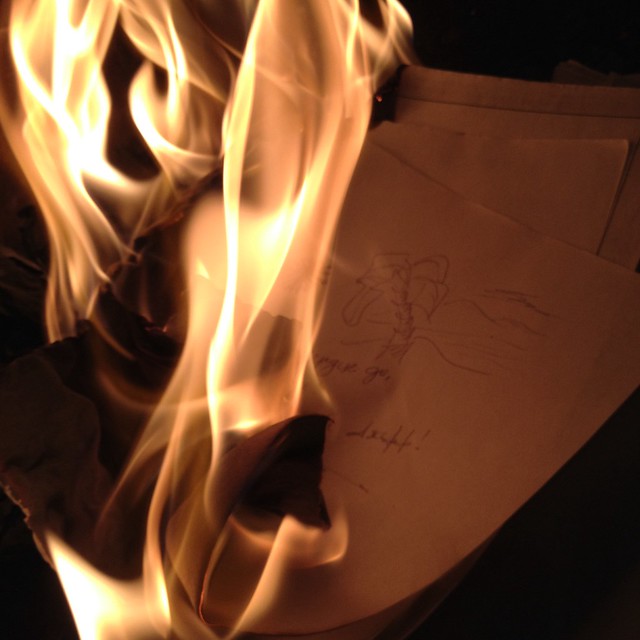 I read through those journals yesterday and I wanted to throw up. Why do I still carry that torment with me every moment? Most of the adults who could’ve protected me are dead, so there’s no chance of apologies or reconciliation or forgiveness.

I did have a couple of relationships that lasted more than a night.

And a come to Jesus moment. 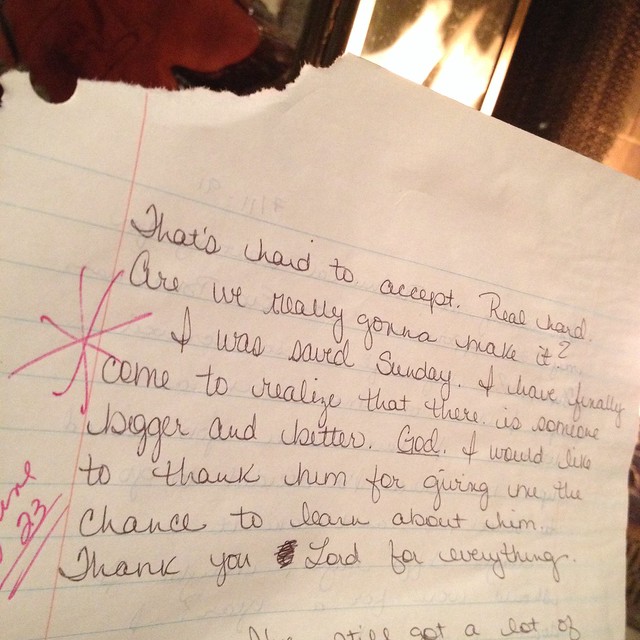 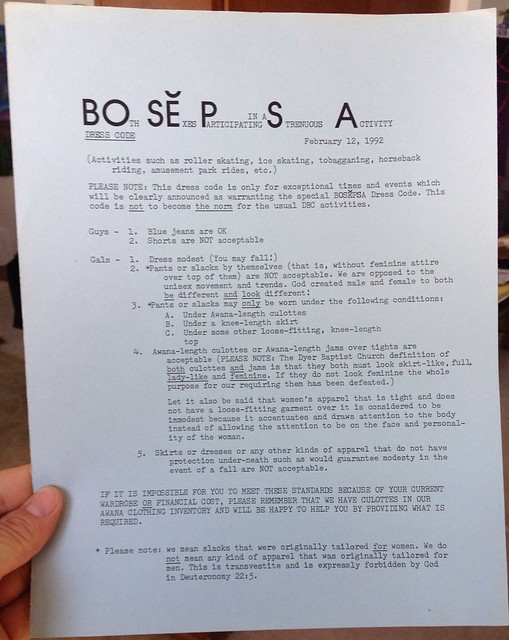 And I turned away from God because of his so-called people. And I started back up with the men, alcohol, and sex. I was out of control. Wouldn’t listen to anyone who tried to tell me I was destroying myself–I didn’t care. I practiced a form of self mutilation that said if I use men first they couldn’t have the power to use me, discard me, or hurt me.  And I wrote all about it. In very colorful detail.

I also wrote about how I shared with some people that I was going to take art lessons and they all laughed at me. I was writing through my tears and hoping that someday I would “make it big and show them all up.” 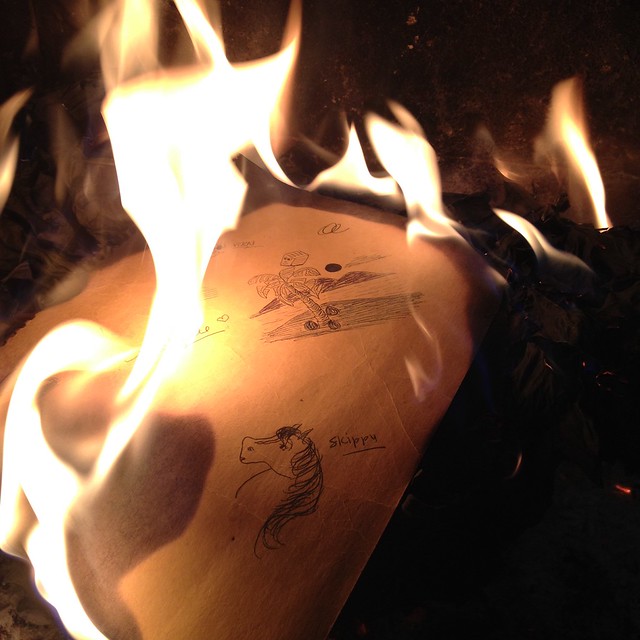 Throwing those pages in the fire was hard for the first few minutes. The tears outnumbered the pages ripped from the notebooks. Every page that caught fire produced a tangible wave of heat.

“Fire is the energetic combination of various substances with oxygen to release light and heat.”

I absorbed the light and heat on my face. I took all of the energy and it became me. In a few transcendent hours, I consumed the energy and I was consumed.

A vision I had last year during my fast:

I was sitting at a rustic dining table, the floor was dirt–we were outside. It was dark and I believe there were a couple of small candles on the table. No food, just a drinking cup made of pottery with water in it.

I stared at him, totally confused. He kept doing it. Finally I said, “God, why are you eating me?”

And in that message, “I consume you” was a vision of him entirely taking me over, dominating me, filling me, lavishing me, captivating me, immersing me, obsessing over me, wrapping entirely around me–

Then another sort of vision of inhaling and exhaling nothing but him, being in his belly (not in a gross way, but more like if I am inside of him as a morsel of food would be, there is nothing else, only Him.)

I listened to the pages burn. The pages that told me what a slut I am, how worthless I am, how undeserving of love I am. They crackled and sizzled, gave up their power and I closed my eyes and inhaled the smoke, drank the heat into my skin, exhaled freedom. They had always whispered destruction, anguish, and pain. The voice of Truth spoke (disguised as my old, dear, and trusted friend, “Journ.) to tell me I that I am valuable, I possess worth and beauty and am worthy of love and would I please just listen?

She said to me last night, “Maybe listening is also about what we need to abandon listening to.”

Strings of never ending words are now nothing more than the energy I took from them last night. It warmed my skin, my body, and at times the power of the heat was so overwhelming I had to back away. The tears dissipated to nothing, spread out into their separate elements while I was becoming whole.

Being purified by fire.

“Behold, I have refined you, but not as silver; I have chosen you in the furnace of affliction.”

I had not been ignored, God did not turn his face from me. I was chosen in the furnace of affliction and refined. Purified. Cleansed. Silver does not corrode, does not react to the atmosphere. At high temperatures, the imperfections fall away.

“Mat 3:11 “I indeed baptize you with water unto repentance, but He who is coming after me is mightier than I, whose sandals I am not worthy to carry. He will baptize you with the Holy Spirit and fire.”

“As the silver nears the final stage of refining it experiences an action known as “brightening”, at the time that the last of the impurities are consumed, the now pure molten metal suddenly emits a bright flash of light and immediately solidifies.”

That is how I feel after burning my journals.