My mother’s family is Bohemian. My great-aunt Mary Skiba came over on the boat. We lived in a tight knit community where most of the neighbors shared our heritage. Growing up, I didn’t know that we ate different than others. When we went to church on Easter to have our food blessed, most people had the same items in their baskets. It wasn’t until I was older that I realized the richness of the Easter European culture I was raised in. Haluski, pierogi,  and Kolachy (prounounced hall-oosh-kee, pear-o-he and coe-lahtch-kee) were everyday words in my family.

We didn’t eat things from boxes. We cooked and we cooked a lot.

When I met my husband, worlds collided. He was from the south where grits, greens, and lots of spice and flavor lived. He thought my food was bland. Admittedly, it was.

He hated my mother’s goulash.

I didn’t know any better. But then I learned that of all the wonderful things my mother made, her goulash was indeed awful. She made it with ground beef, green pepper, pasta, and ketchup.

This recipe is dedicated to my husband who now likes my goulash and was very upset that I took it to the Goulash Cook Off in Czech Village. He was upset he only got one bowl and a bunch of strangers ate the rest. :). Much thanks goes to him for teaching me how to amp up my cooking, how to give my dishes depth, and how to use herbs and spices beyond salt and pepper.

2-3lb beef roast (venison can also be used, or a mixture)
Paprika (a mixture of smoked and Hungarian)
Coconut oil or bacon grease (I used a little of both)
a few good sized yellow onions
a head of roasted garlic
a few roasted peppers, I used a green pepper, a red pepper, a couple of Hungarian peppers, and a couple jalapeno peppers
My secret ingredient: a pint of home-canned roasted New Mexico Hatch chile peppers (if you don’t have these, you can add a can of green chiles. The flavor won’t be exactly like mine, but it will still be good)
2 quarts of tomatoes (I used fresh from the garden, peeled tomatoes, but will substitute my homegrown and home-canned tomatoes when fresh aren’t available)
2 quarts beef stock (I make my own so store bought broth can be substituted, but again, it will change the flavor drastically)
Fresh ground caraway seeds
Marjoram
Cayenne pepper
Pink Himalayan salt
Fresh ground black pepper

arlic, etc… just in case you don’t know how to do those things. Don’t get intimidated, they’re all very simple, but take a little time. This makes a very large batch, enough to freeze for those days when you just can’t cook. Quart freezer bags work wonderful and take up very little space. Cut the recipe in half if you don’t want to freeze some for later.

1. Cube the roast, coat it in paprika, melt a couple tablespoons of oil, and sear the meat. (Searing means cooking it at a higher temperature and browning the outside, leaving the inside uncooked.) As the small batches are finished, put them into a stew pot.

2. While you’re working on searing all that meat, roast your peppers and garlic.

3.  Once all the meat is finished searing, in the same pan add a little more oil and caramelize the onions.

5. Add the rest of the ingredients. I like caraway seeds, so I crush them in my mortar and pestle and I add a tablespoon or so. You might like less. Same with the marjoram.

6.  Add the remaining ingredients to the stew pot, bring to a boil, then reduce heat to a low simmer for a few hours (until the meat is tender and falling apart and does not need to be cut with a knife.)

This picture below shows the pot of goulash as well as a pot of potatoes boiling. I tried to make potato dumplins to eat with the goulash because a real serving of goulash needs some bread dumplings. But I’m gluten free, so I tried potatoes. They did not work well, I ended up smashing them and making fried potato pancakes. Now that was good. Today, I made another batch of goulash and ate it over brown rice. That was also satifying.

No additives. No preservatives. No MSG.   Nothing but real food and goodness. I’ve tweaked this recipe to my version of perfection!

* * *
Not so good this week. Spent double the budget. Sure, that’s only $30 instead of $15 but it was well worth it to get some fresh fruits and veggies and the makings for potato salad and carrot raisin salad. Recipes below! My friend, Toni, made the carrot raisin salad for lunch one Creative Day and I’ve been craving it–so I found a recipe and tweaked it.

Our grandbaby might be coming Wednesday. Jess has an ultrasound and the doctor will decide if she want to induce on Wednesday or the following Monday. I’m going to plan the week just in case.

We rented a condo with a full kitchen down by Jess so I’ll need to make a plan for the week we’re with her. My parents stay here to watch the dogs so I’ll need to pull some food from the deep freeze to the kitchen freezer for them.

I can’t believe this is all happening so soon!!

Monday–ham and beans from the freezer, fresh cornbread

Sunday–If the baby’s not induced Wednesday, we’ll be leaving early in the morning today!

1. Wash and chop potatoes, boil until tender (but not falling apart!) then rinse in cold water for about 5 minutes. Shake excess water away and dump back in pot. 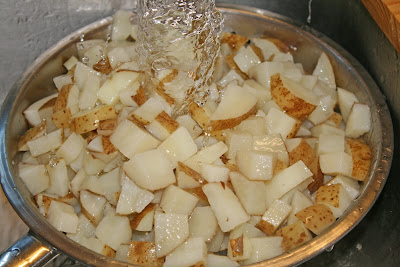 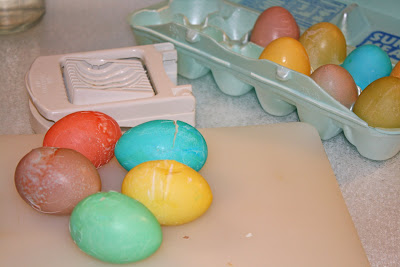 I use my handy-dandy Pampered Chef egg slicer. I put it in. Slice. Take it out and turn it. Slice. Then one more time I turn it and slice again. It makes a mess, but it’s way less messier than chopping them on a cutting board. 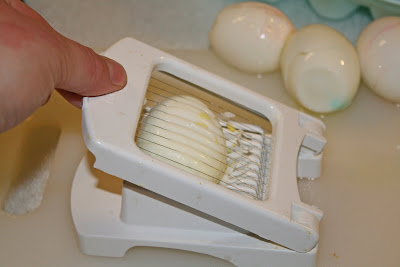 3. Chop everything else (or use your food processor. I don’t like to dirty a ton of dishes, so the potatoes and everything else go back into the pot and I mix it in there. Then I move it to a storage bowl with a lid and stick it in the fridge. 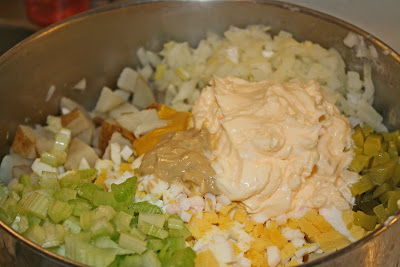 Voila! You have MSG and preservative free Potato Salad! It tastes better after it sits in the fridge for a few hours! 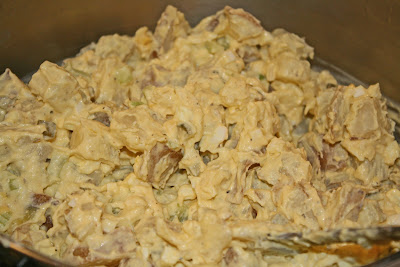 This is pretty straight forward. Shred your carrots and celery, add everything… 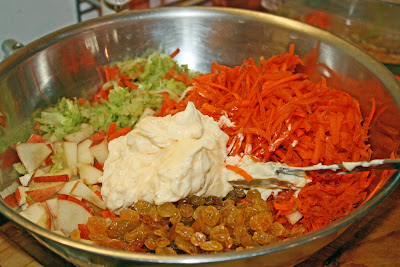 And mix. You’re done! It tastes better after it sits in the fridge for a few hours! 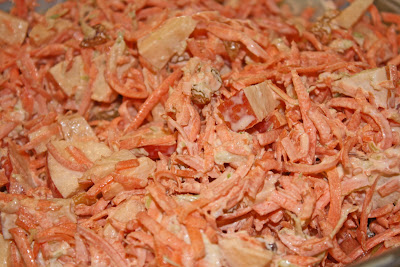 When you do a grocery budget–do you do an entire “everything needed for the household” budget or just a grocery budget and everything else like toilet paper, light bubs, dog food, etc goes on a different budget?

We didn’t eat a couple of meals I had planned last week for various reasons. We’re not eating the same things two weeks in a row, I’ve just moved them.

1 bag egg noodles
1 can of tuna
1 can of (choose one) either cream of mushroom, cream of chicken or cream of celery soup**
1 1/3 cup milk
2 sticks butter (I hate margarine)
2 row of saltine crackers
salt
pepper

3. In a large bowl (large enough to fit all of the noodles as well as other ingredients) mix the can of soup, the milk and some salt and pepper. Mix well.

4. Add the noodles to the mixture and mix well.

4. Melt the stick of butter in a medium sized microwavable bowl (I do it in the microwave–30 seconds at a time until it is fully melted)

5. Crush the crackers in their sleeve. Be careful the sleeve doesn’t pop!

6. Mix the crackers with the melted butter.

7. Place cracker and butter mixture on top of noodle mixture and spread evenly. Make sure all the noodles are covered, if they’re not they’ll get hard when they’re baking (and I don’t like that)

**Since I cook MSG free, I either have to look for soup cans that say No MSG or I make my own. To make a tasty substitute for a cream of celery soup: melt 2 tablespoons of butter (I hate margarine!) in a saucepan. Chop up some celery and onions and saute them until the onions are clear. Wisk in a cup and a half milk. You can add salt and pepper if you’d like. That’s it!