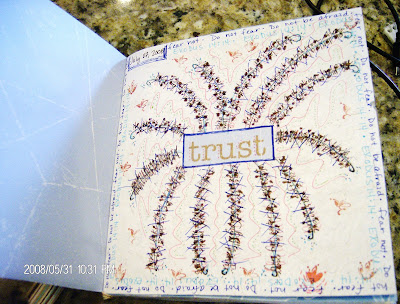 In the past five years, I’ve found that many of my spiritual battles have been pretty obvious if I pay attention. When I was just getting back into faith, trying the Bible on for size, and stretching my believing muscles, I was typically hit with financial difficulties like this one. Phil’s been with me for all of the battles, but I’m speaking for myself in the lessons because I think we are all tested and tried in unique ways and even though we were going through what appeared to be the same situation we were each struggling with different pieces of the same puzzle.

The financial woes I experienced looked like a different animal to Phil–maybe a self-esteem or a pride issue. (not saying that’s the case, just trying to explain how a problem can be one thing for me and another for him.)

When I learned to trust God for all things involving money–which is a hard lesson and I’m not nearly as mature as I’d like to be–the battles started involving electronics. I remember I’d made the decision to write and my computer crashed and then the laptop crashed. My mom (graciously) gave me an old one of hers and it didn’t have Microsoft Word on it. I posted a question on a message board asking if there was an open source version of Word and a wonderful man sent me his old copy of the program. (I’d mention his name, but I didn’t ask permission and I don’t know if he wants the public glory. I’d love to give it to him, but he’s a rather humble man and he sent it because he’d just prayed asking God to show him someone in need of the program) I was floored.

Soon after, our cat knocked over the Beta fish bowl onto the laptop and fried it. I thought I blogged about that but I can’t find it.

Those are just a few of the examples. Other things include cell phones losing signal at important moments, power going out for no reason, etc…

So that brings us to the topic d’jour. Seems that things have escalated a bit. Now the battles are financial and electronic.

I can’t lie. I totally stressed out yesterday over the latest event. However, I did something I don’t normally do. I prayed. Yes, I pray regularly, especially when people I know are in need. I’m a great intercessory pray-er. When things go wrong in my life, though, the first thing I do is blame myself. Then I get down on myself for being a complete and total idiot. Then I get depressed. Then I vow to never let something like that happen again (as if I have control!)

Yesterday, though, I grabbed some pretty scrapbook paper and made myself a Praying In Color journal that I could keep in my purse. And I prayed–in color. I found out about it while surfing the web a few months back and it has done wonders for my prayer life.

I took a picture of the one I did last night. Just because.

EDIT TO ADD: Did you happen to notice the date I put on that prayer in the photo? Wow. I got out my journal to draw one for today and saw that. What the…?