Advent Vespers. The grandest organ you’ve ever laid eyes upon. Voices of the choir like angels filling the chapel. The Latin that made me angry in my youth is balm to my weary soul in this season of grief.

“For there is something odd about God:  From the beginning of time, God never chooses the kind of people we might expect to accomplish the divine agenda…God’s unexpected witnesses.

And all of us here tonight–readers and singers, watchers and hearers–are also part of that band of unexpected witnesses, ‘God’s chosen ones.'”

Amos’ words read. A reading from the book of Amos.

Words from God to His Chosen Ones

I can’t stand your religious meetings.
I’m fed up with your conferences and conventions.

With my attendance to Vespers?

I want nothing to do with your religion projects,
your pretentious slogans and goals.

I’m sick of your fund-raising schemes,
your public relations and image making.

I’ve had all I can take of your noisy ego-music.
When was the last time you sang to me?

When Lord?  Have I ever?

Do you know what I want?
I want justice—oceans of it.
I want fairness—rivers of it.

I’ve not sang to you, Lord.
Is it possible you would accept my song now?

is what i want to sing,

if You will accept it from me, an unlikely character in your band of unexpected witnesses

Y’know in that little tab up there, the Coram Deo tab? Well. This is part of the ugly.

So that Advent thing, the Jesse Tree Advent devotional I wanted so bad to make a tradition? Yeah. Not going so well.  The first night was great. The second, I almost forgot, but it went ok. The third night? nothing. And last night.

Let’s get this part out of the way. I got angry. Super-temper-tantrum-banging-things-angry. We had this really nice movie night complete with old school buttered popcorn. Then Zane asked (asked!!) if it was time to do the “Christmas thing” and my heart was all full of joy and we sat and needed to catch up two days and I started reading

and I don’t know what happened.

And I didn’t say anything else, I went upstairs to go to bed, but I was too mad to go to bed, so I did the dishes and slammed everything and wanted to break things I was so mad that this one thing I wanted to do got screwed up so bad. Then I wanted to take the Christmas tree down and forget Christmas. Let someone else do the shopping and baking and planning and wrapping and worrying because Phil doesn’t even like Christmas and Zane only wants presents and that’s why I thought the Advent thing would be a good thing. So why do I do all of this? Why do I decorate and try so hard to make traditions and memories when no one even cares?

And sure, the pat answer is that because I’m doing something for God, Satan is stepping in to make sure he ruins it. Which, of course, is entirely possible. But what if it’s not that? What if it’s something else?

Is it a lesson for me? Do I love the things of Christmas more than I love the reason for Christmas? Am I selfish to want to make traditions?

Zane didn’t want to help me decorate the tree (again) this year and I pretty much begged him to help and he asked why I was begging. I said, “Honestly, because I don’t have my mom now and I miss her and you’ve still got me and you don’t want to spend time with me and I want you to.”

Sometimes (like last night and still, now) I think, it’s just not worth all the effort. Why do I bother?  Why do I feel this need to cram my ideas down their throats?  So I cried myself to sleep over it and I woke up still upset.

And yes, I could’ve just pushed through last night. I could’ve ignored the comment Phil made. But if they’re both only doing it for me…then it’s really not what it’s supposed to be. Maybe I should’ve pushed through. I don’t know.

The sentence I kept reading over and over when Zane was doing the tapping thing?  “He was sorry he had made human beings on the earth, and his heart was filled with pain.”

Nothing like God’s words coming alive in your living room. I imagine he’s not all too pleased with me right now.

They’re printed, the Jesse Tree ornaments.  Cut out, glued to the back of old Christmas cards. The wreath was made from things already here, the ornaments, too. No lamination, just Mod Podge and help from him.

Yesterday, the first day of Advent, almost another failure to note. Almost. But the wreath sitting on the coffee table reminded me at the very last moment. Hesitant to call up the stairs to them to admit my oversight, they answered with tooth-brush stuffed mouths. And yes, they both came down in their underwear to read the first devotional of Advent with me.

And they weren’t upset.

Earlier, he helped get the printed sheets of this book into page protectors and a binder. Me, with secret hopes of this becoming a tradition for the generations to come.

Something feels different this year.

This peace in my soul

this trying, this intentional listening

“Go out and stand on the mountain in the Lord’s presence.”

At that moment, the Lord passed by.

A great and mighty wind was tearing at the mountains and was shattering cliffs before the Lord, but the Lord was not in the wind.

After the wind there was an earthquake, but the Lord was not in the earthquake.

After the earthquake there was a fire, but the Lord was not in the fire.

And after the fire there was a voice, a soft whisper.

Intentions are great year after year, yet failure overtakes my best efforts.

Not this year, though. No. Not this year. This year I want–need. Need to know that even here His hand will lead me; His right hand will hold on to me.

Candles found stuffed in a drawer.

Canning jars emptied and piled in the basement waiting for next year’s harvest.

An old chip and dip basket.

Her gift, downloaded, not yet printed.

Maybe this will be the year.

A new Advent wreath from things already here. Waiting for the coming Immanuel, God with us. Always with us. 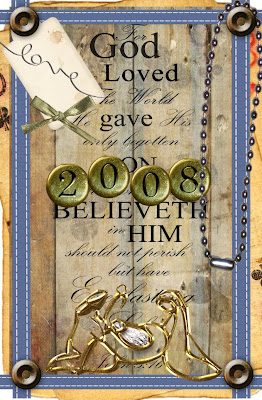 Little did I know when I decided to participate in SoulPerSuit‘s Contemplative Christmas series that the first theme would be Barn Smells and that I’d be staying in a barn that very week.

I’ve not spent much time in a barn, not like my husband, Phil, has. He was raised on a farm, put up hay every summer while his eyes swelled shut from hayfever…we celebrated our tenth anniversary together at the Rawhide Ranch, a dude ranch with an 11 room bunkhouse built over the 32 stall horse stable below. (I wrote a little about it here.)

We walked in, smelled the hay, put our bags down and went straight to the pharmacy for Benedryl, Claritin, and Afrin nose spray to ease my poor husband’s allergies.

And I thought about the theme of barn smells. It wasn’t the animal smells or the dirt or moisture, it was the hay that did my husband in. Such a small little oversight in my planning could have made our whole anniversary trip a disaster without allergy meds. Thank you Lord, for not overlooking the details, not forgetting.

I don’t think Christ being born in a barn was a bad thing, I’ve never thought that. As I get older, I realize that all of this is more than I can comprehend.

My card is my first foray into the world of digital scrapbooking. Can you see the antique playing card behind my design?