A dream I had last night:

Phil and I were doing something in the house, I can’t remember what. We headed outside to look at (or watch) something, some event. There were quite a few people gathered outside forming a crowd…seems like it was on a farm because there was a lot of land, a barn off in the distance and barbed wire fences.  It was raining. There was a semi in the driveway and I knew if I got up in it, I’d be able to see above the crowd. I climbed in and the scent was familiar, very familiar. It was the scent of my mom’s clothes, but I knew that wasn’t possible. The window was down, I was in the driver’s seat looking out to the crowd and I still couldn’t see too well. The scent in the truck was real. It was my mom.

I turned to see if she was in the sleeper and I saw a  green,  heavy canvas duffel bag  with the E, J, & E Logo on it. The railroad my mom worked at and retired (twice!) from. I was certain, then, that I was not insane and my mom was truly occupying this semi.

I called out the window to Phil and told him what was inside. He climbed up and looked at the bag and was as surpri 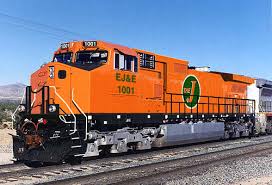 sed as I had been. He got out of the truck and I sat there for a few minutes wondering where my mom was if she wasn’t in the truck.  I stared at the bag trying to recall when she’d got it. “The J,” as everyone called it,  gave stuff like that as safety awards and mom was always coming home with something.

Mom saw I was in the driver’s seat so she went around to other side and got in. I had this conversation with her, “You’re driving a truck?!” and she was so excited that she got to travel and see the United States. She asked if I realized what company she was driving for and I hadn’t, so I looked out my door and saw the Prime, Inc logo on the door of the yellow truck. “You have a  yellow truck just like the one we had?!”  She shook her head yes.

“Isn’t it hard for you? You’re not good at directions.”  She said that with GPS, she could go anywhere without getting lost.  Good point, mom.

I started giving her tips about truck driving, she was asking questions, I was answering. Telling her stories of when Phil and I were on the road together. She mentioned us going over the road again and I talked about Zane still being in school, but we did enjoy it (for the most part) when we were driving together.