Rough days are inevitable. Seems like they come in conjunction with some of the biggest blessings. Which I suppose is par for the course.

What makes rough days worse is stupid people. Or stupid mean people. Or just plain ole people.
It might not be that way for you. I walk a tightrope between introvert and extrovert so while some days being with people energizes me, other days, it exhausts me to a disturbing point.

I continually read on of Oswald Chambers’ devotionals about exhaustion. You’re doing yourself a huge disservice if you relate to what I’m saying but don’t read this. It’s short.

I was feeling pressure from so many areas (some of them self-induced) so I decided to take a bath with some lavender bath salts, listen to Jeremy Camp on the iPod dock, and have some quiet time with God. I covered my eyes with a washcloth and asked the Holy Spirit to quiet my soul.

It took awhile. I think my mind naturally resists being still and quiet. The song Letting Go came on and behind my washcloth covered closed eyes, I clearly saw a jar with tears in it.

Then I put on my big girl panties and decided I could trust God to handle these mounting problems of mine. If he could store my tears in a jar, he could certainly take care of some insignificant people that were bothering me. Besides, what they do shouldn’t be my concern, right?

I hurried to my easel and painted a jar.

Then I decided I needed to know where that verse was and in what context it was written. Turns out, it was smack in the middle of a Psalm. Psalm 56. 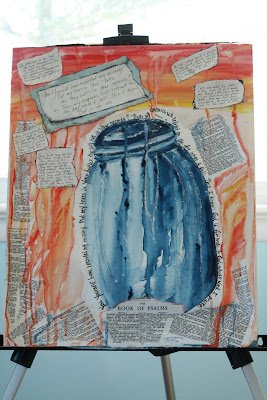 And what a wonderful Psalm it is for someone in the position I had been complaining about being in. 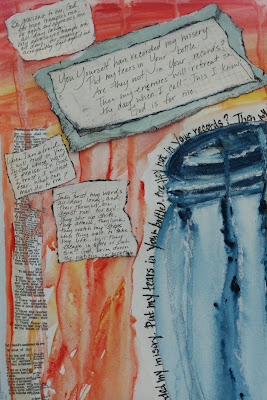 By creating prayer, renewal washed over me.

My spirit calmed and then soared.

The urge to crawl into bed and hide away from the world for weeks on end was gone.

Not alone in misery and wandering, but every tear recorded and kept in God’s bottle.

She didn’t let me take too many pictures of her because she thought the flash was lightning. 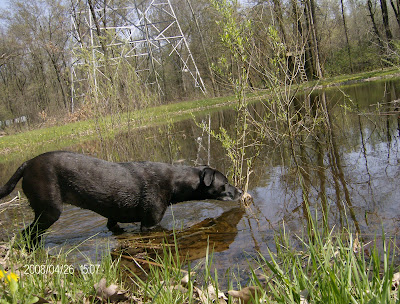 She’s been gone 5 days now and I’m trying not to talk about it because as much as she frustrated me rolling in dead stuff, well, I don’t want to believe she might be dead somewhere.

This morning, Kimmie was taking Sarah to school. Kimmie is my best friend and Sarah is Zane’s.

Kimmie handed her a dollar for chapel and Sarah said, “Did Molly come back?”

(This is hard for me to talk about.)

We’re guessing that the reason Sarah asked (when handed the dollar for chapel) is that she must be praying for Molly in chapel. Which we have been, too. Every.single.morning before Phil leaves for work.

It has changed from, “Please bring her back.” to “If she’s not coming home, please don’t let her be suffering.”

It’s hard enough for me to accept. Sarah’s cat Sturdy, who was 15, just ran away a couple of months ago.

If feels like 9 is too early for a little girl to learn that sometimes our prayers don’t get answered the way we want.

At 37, it’s hard to learn that prayers don’t always get answered the way I want.

I want to tell the whole story later, right now, I can’t.

It was just her and I and I was singing Let There Be Peace to her. I sang, “Let me walk with my brother…” and she was gone.

Visitation will be at Rees Funeral Home, Brady Chapel in Lake Station, IN Sunday. I expect the website will be updated this afternoon with times after my mom and her siblings meet with the funeral director.

Sometimes I just don’t have words.

Until they remind you your dead best friend’s birthday is coming up. Not a fun way to wake up this morning.

**Dibs on title** Total Avoidance would be a great name for a short story. I’ll have to write that as soon as I get on with this avoidance thing.

I am so not good at this shit.

I watched another movie over the weekend and I can’t get it out of my head. It sounded funny. It was funny. It really was–at times. At other times it was completely gut-wrenching for me.

The movie is Two Weeks. “In this bittersweet comedy, four adult siblings gather at their dying mother’s house in North Carolina for what they expect to be a quick, last goodbye. Instead, they find themselves trapped– together — for two weeks.” 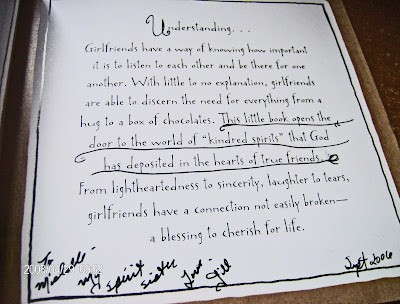 I’ve been trying to avoid thinking about it since I finished the movie. But it doesn’t go away. I wrote about my best friend in the whole world dying and dammit I miss her.

I keep waiting for her late night phone calls and her 3 part messages on my phone. I hear her voice in my head constantly. I find little things all over my house that she sent me. Things that are just stupid to everyone else, but they tell me a story. They remind me that Jill cared enough about me to think of me and she’d send it or give it to me while I was visiting. A Starbucks sleeve, a Hershey’s chocolate mug that says Jim on it. A little “shit shovel” for my brain. And she’s gone. Fucking cancer.

What hit me most about that movie, a lot of it hit me hard, but there was a part–

Sally Fields is the mom dying of cancer. At one point her daughter tells the brother, “That’s it. She waited for the grandkids.”

And Jill waited for me. I brought her mom down stayed a week with her, laughed, cried, watched New Year’s Eve fireworks from her hospital room, and left. Do you know how hard it was to leave knowing I’d never see her again? I kissed her forehead again and again and didn’t want to move. I told her I loved her over and over and tried so hard not to break down. I couldn’t hug her because it hurt her little body too much.

I started the drive from South Carolina back up home and it was horrible. I had lunch with a friend that day in Kentucky, thank you God. And Jill called to make sure I got there. She could barely breathe or talk, but she called to make I got there okay.

Was I that kind of friend to her? God, I hope so.

I always thought those little gift books were stupid. But with Jill’s posty notes and handwritten funnies inside, I now know I’m the stupid one.

She’d slap me upside the head and change the subject if she were sitting here with me. She’d babble on and on about silly, fun stuff until she had me in tears of laughter instead of sadness.

I still have her phone number on my cell phone. I still go to her blog and read over and over few posts she put up. What do I do with that?