I’ve tried to make a conscious effort the past six weeks to keep up my previous tackles because the Fly Lady I ain’t. (Get dressed and put on shoes every morning? You have got to be kidding me.) So every week I’ve been looking at my pretty After Tackle pictures to inspire me to spend a few minutes putting things away or straightening up. So far, it’s working.

If my husband would just hire a maid for me, I wouldn’t have to worry. Since I don’t think he has plans for that anytime soon, I guess it’ll just have to be up to me. Why do they give these jobs to people who can’t do them? I mean, really. Wouldn’t it make more sense to make sure the candidate is qualified? I’m not sure I’ll ever be June Cleaver or Martha Stuart. Really, I don’t even aspire to be. They scare me.

I’m aware that’s only four weeks. I don’t want to talk about the fifth.

Today I’m tackling my kitchen. I timed it, too. It only took me 20 minutes!

In the spirit of honesty, take a look at that little towel (is that called a tea towel?) hanging there under the coffee cup shelf. It says Tuesday.

The last time I changed that towel was Tuesday January 22. (Did I just say that in front of everyone?) It’s a decoration! I haven’t been actually using the same towel since January. That would just be gross. And I’m not gross. Just lazy busy with things that don’t involve decluttering.

Hush. I know it’s not as bad as taking the Christmas Tree down in July. (So that was the fifth. There. I said it. Are you happy?)

Before my 20 minute tackle:
Those are mostly clean dishes that I didn’t put away.
Because I’m lazy busy. 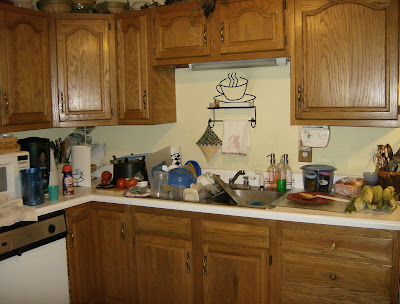 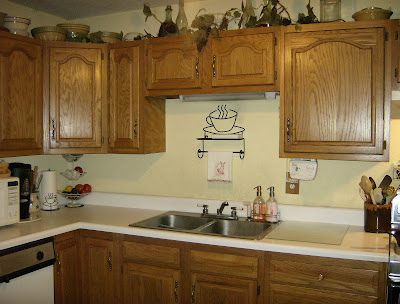 Did I mention how much I love staring at the before and after photos?

I did my tackle early this week (EARLY–did you read that?!) so that I could be featured here (oh what was I thinking?!) I changed the little towel and now it says Saturday. Visit me in six months or so and I might change it again!